A Passive Infra-Red (PIR) sensor is an electronic device commonly used in security lighting, and burglar alarm systems. A PIR sensor is a motion detector which detects the heat (infrared) emitted naturally by humans and animals. When a person in the field of vision of the sensor moves, the sensor detects a sudden change in infrared energy and the sensor is triggered (activated).

At the front of a PIR sensor unit is a fresnel lens (pictured above). This special kind of lens is used to gather light from a very wide field of view and focus it directly onto a passive infrared sensor (as shown below).

Some electronics inside the PIR sensor unit then decide whether the infrared light detected is from a warm moving body, and if so, triggers a switch.

The commonest use for a PIR sensor is automatic security lighting. Whenever a suitably large (and therefore probably human) warm body moves in the field of view of the sensor, a floodlight is switched on automatically and left on for a fixed period of time - typically 30-90 seconds *. This can be used to deter burglars as well as providing lighting when you arrive home at night.

* The duration the light is left on for can usually be set by the user.
Such PIR security lighting systems are available.

In order for a PIR sensor to work well most of the time, they are designed with certain limitations. A PIR sensor cannot detect a stationary or very slowly moving body - if the sensor was set to the required sensitivity, it would be activated by the cooling of a nearby wall in the evening, or by very small animals. Similarly, if someone walks straight towards a PIR sensor, it will not detect them until they are very close by.

Occupancy sensors detect when a space is occupied or unoccupied and turn the lights on or off automatically after a short period of time to save energy.

Energy Savings: Depending on the characteristics of the space to be controlled, energy savings as high as 90% can be realized through use of occupancy sensors.


In 1997, researchers studied energy savings potential for occupancy sensors in buildings in 24 states representing a cross-section of commercial building types*. The study monitored occupancy and the number of hours the lights were on in 158 rooms, including 37 private offices, 42 restrooms, 35 classrooms, 33 conference rooms and 11 break rooms. Potential energy savings for these spaces types were calculated as follows.


Sensor Variables: When specifying an occupancy sensor, the below variables are relevant.


Sensor Technologies: Occupancy sensors detect the presence or absence of people using one or a combination of several methods. The most popular methods are passive infrared (PIR) and ultrasonic. Dual-technology sensors use both methods. Each method has advantages and disadvantages that make it more suitable for some applications 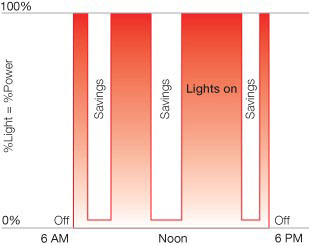 PIR Occupancy Sensors: PIR occupancy sensors sense the difference in heat emitted by humans in motion from that of the background space. These sensors detect motion within a field of view that requires a line of sight; they cannot “see” through obstacles.

The sensor’s lens views its coverage area as a series of fan-shaped coverage zones, with small gaps in between, and is most sensitive to motion that occurs between each zone (lateral to the sensor). The farther one is from the sensor, the wider the gaps between these zones become, which decreases sensitivity proportional to distance and can result in nuisance switching (false-off). Most PIR sensors are sensitive to full body movement up to about 40 ft. but are sensitive to hand movement, which is more discrete, up to about 15 ft.

Ultrasonic Occupancy Sensors: Ultrasonic occupancy sensors utilize the Doppler principle to detect occupancy through emitting ultrasonic sound waves throughout a space, sense the frequency of the reflected waves, and interpret change in frequency as motion in the space. These sensors provide volumn metric coverage and may not require a line of sight position as long as hey are not fully blocked by obstructions such as bookcases. partitions which extend to the floor, etc.
The sensor's transmission does not include gaps between discrete coverage zones making up the field of view and so can be sensitive to hand motion at distance up to 25 ft. However, the sensitivity of ultrasonic sensors makes them vulnerable to nuisance switching (false-on) due to confusing air movement near a supply grille, for example, with human motion.

They activate the lights when both technologies and only the infrared technology detect the entrance of people. Lights are deactivated only when both technologies no longer detect the presence of people. This redundancy in method virtually eliminates the possibility of false-on and significantly reduces the possibility of false-off. Appropriate applications include classrooms and other spaces with low motion levels by occupants.

Another type of dual-technology sensor combines PIR technology with acoustic detection to reduce the possibility of nuisance switching.

Coverage Area: Manufacturers publish range (ft.) and coverage area (sq.ft.) for their sensors in their product literature. Many different coverage sizes and shapes are available for each sensor technology. The coverage area may show the maximum range and coverage area for minor motion (hand movement), medium motion (arm and upper torso movement), and major motion (full-body movement). The published pattern is often based on the maximum sensitivity setting for the sensor. Effective minor motion detection (motion at a desktop such a reaching for a telephone, turning a page in a notebook, etc., is critical to ensure that lights are not turned off inadvertently in occupied offices and classrooms.)

Mounting: Below are typical mounting configurations for occupancy sensors.

Special Features: Depending on the manufacturer, a number of special features may be available for its products that can be used to optimize their application.

Manual-On Operation: The most specified control option for occupancy sensors is automatic-on—the sensor turns on the lights automatically when a person enters the space. Some sensors, however, are available with a switch and require a manual-on operation. This can increase energy savings because the occupant has the option to not turn on the lights because of available daylight or task lighting.

Masking Labels: PIR sensors may be available with masking labels that allow the coverage area to be fine-tuned to prevent false-on triggering. For example, if a sensor’s coverage monitors a private office but also an adjacent corridor, then the masking label can be used to obstruct the sensor’s line of sight to the corridor.

Bi-level Switching: Bi-level switching is encouraged by most energy codes and is a requirement for qualifying for the Commercial Buildings Deduction. Some power-packs include two separate relays for controlling two circuits simultaneously or independently. This allows the sensor to integrate two manual switches for bi-level switching, which saves energy. For example, in a four-lamp troffer, one switch could control the ballast powering the outboard lamps, and the other switch could control the ballast powering the inboard lamps. Automatic, occupancy sensor wall switches which can switch either or both of the loads are available.

Daylight Switching: Some sensors can work with a light sensor to turn off the lights in response to sufficient ambient daylight and/or prevent the lights from reactivating as long as sufficient daylight is available. The setting is typically adjustable and can be overridden. Caution: Ensure that the position of the sensor which incorporates a photocell is placed where it will measure the foot candles on the work surface and that the photocell technology used is capable of measuring light levels accurately.

Combination Dimmer/Occupancy Sensor: Some wall-box sensors combine the functionality of an occupancy sensor and dimmer. The lights can be switched or dimmed based on occupancy. Dimming fluorescent and HID lighting requires compatible dimmable ballast.

Isolated Relay: Some power-packs and/or sensors contain a separate small low-voltage switch for control of and interfacing with additional loads such as HVAC, security and building automation systems. For example, people entering a building after hours trigger not only the required lighting, but also heat or air conditioning as well.

Integration with Fixtures: Like photosensors, occupancy sensors may be available as an integrated component within a light fixture for easier installation and an integrated appearance.

PIR Sensors passive infrared detector that will give you the edges over the competition and secure your business contract in today's price oriented market. The company has a consistent record of growth and expansion with fast increasing sales turnover since its inception.

Float Sensor is an electrical ON/OFF Switch, which operates automatically when liquid level goes up or down with respect to specified level. The Signal thus available from the Float Sensor can be utilized for control of a Motor Pump or an allied electrical element like Solenoid, Lamps.